How Much Creosote and Tar is in Your Chimney? 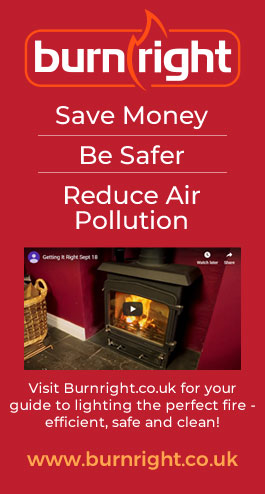 How Much Creosote and Tar is in Your Chimney?

The 3 Stages and Associated Dangers

Most homeowners will realise that the thought of a build-up of creosote and tars inside a chimney is likely to be dangerous. It can cause poor chimney performance and possibly lead to a chimney fire if left untreated.

So, what is Creosote?

Unlike normal soot, creosote is much harder to remove.

Typically, there are three types of creosote found in chimneys, and in the trade, they are usually referred to as “Stages of Creosote or Degrees of Creosote”.

Whatever stage or degree the creosote is at, it is combustible, so it should be professionally removed.

STAGE 1: APPEARS AS A LIGHT COATING

Creosote is a by-product of burning wood in your fireplace. The first sign that it is building up in your chimney is normally a light soot coating to the inside of your chimney. While this level of creosote coating may not be immediately dangerous, it is important to act in a timely manner to have it removed. Having your Chimney Sweeping done regular will remove this level of build-up and help prevent more serious problems such as chimney fires or Carbon Monoxide incidents. If signs of tar or creosote are present, we will always offer our expertise and advice on burning fuels. 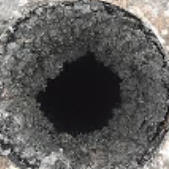 The second stage of creosote build-up can look like black/crispy flakes on the inside of your chimney or flue pipe etc. This is where creosote starts to get concerning. If you have this level of build-up inside your chimney etc, it will likely take a little more effort to remove it. Often it will require a more vigorous procedure and could even mean more than one visit to your property. Again, prevention is always better than cure, so if we discovered this level of build up in your chimney, we would discuss your burning habits. 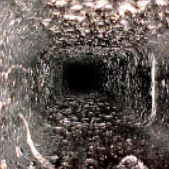 The final stage of creosote build-up looks like a thick and shiny coating of tar in the chimney. It can even look like it is dripping down the sides of the chimney. This is because as it heats up, the creosote can melt. This thick and shiny coating can easily cause a chimney fire, which is extremely dangerous. At this point, we would be deeply concerned as to why and how this has been allowed to happen.

Howards (Tarleton) will most likely be able to remove this level of build-up and will probably advise on a specialist chemical treatment. However, it is worth noting, that it could mean having to replace your flue liner, (especially if a flexible stainless steel is fitted) which will add significant maintenance costs. It is therefore much better and cheaper to have your chimney swept and maintained at least annually, and ensure you receive expert burning advice well before creosote or tar build-up reaches this point.

How can you tell if you have creosote or tar inside a chimney?

You will quite possibly notice a strong and unpleasant smell coming from your chimney or lingering in the room where the appliance is fitted. You could well even see evidence of tar staining behind the appliance or coming through walls.

When cleaning your chimney, we will be able to identify whether creosote or tars is present from what comes down the chimney.

If there is any doubt to the level of build-up, structure or condition of your chimney, a CCTV inspection can be carried out to identify what and where the problem is. From there on, we will advise the best ways to avoid allowing creosote or tar build up in the first place.

What are the dangers of a chimney fire?

A chimney fire is extremely hot, in some cases reaching over 1,000 degrees Celsius and can burn through even a well-built solid chimney, potentially setting the building on fire or that of an adjoining property.

A fire will damage any liner you may have fitted and almost certainly require relining. The high temperature of a chimney fire can damage the bricks to your chimney stack, which could result in it having to be rebuilt.

In all instances of a chimney fire dial 999 and evacuate the building immediately.

Some of the mains reasons creosote and tars form in chimneys include:

If you would like to discuss your appliance fuel burning requirements or anything to do with your chimney, please do not hesitate to get in touch.

Howard’s (Tarleton) carry full liability insurance and in addition to being Master Chimney Sweep members of the Guild of Master Chimney Sweeps, we are also HETAS registered installers and approved chimney sweeps. We are proud to have been doing what we do for almost 60 years, ensuring the safety of everyone concerned.

We are also a proud member of the Safe Trader Scheme and have received fantastic Testimonials from our customers over the years.